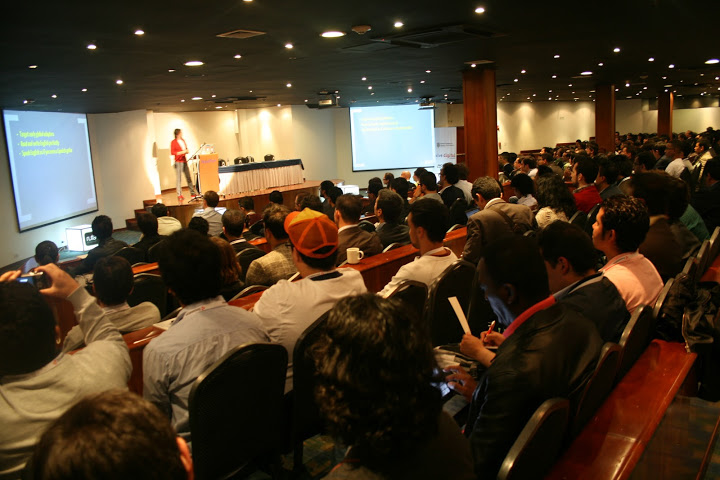 In this so-called bridge we keep talking about between Latin America and Silicon Valley, one gets the feeling that most of the traffic is headed north. But with PulsoConf last month, we did our part in getting things moving in the other direction as well.

From the 28th to the 30th of September, over 400 entrepreneurs, investors, developers, journalists and other professionals from Latin America and all over the world gathered for the first annual PulsoConf in Bogotá, Colombia. The event featured presentations, panels, competitions, networking opportunities and more.

Attendees ran the gamut from engineering students and budding entrepreneurs to world-renowned design leaders and international investors, a fact that demonstrates the truly unique nature of the PulsoConf opportunity.

Though the Latin American startup scene is growing, it is still in the early stages, lacking the success stories, evolution, leaders and financial substance necessary for a truly robust ecosystem. PulsoConf was refreshing in that it brought in figures from Latin America, the U.S. and around the globe to showcase the endgame of what may currently feel a long way off for many.

The entrepreneurial narrative was a running theme of the three-day event. Ran Harnevo shared his story as an entrepreneur having experienced success in the video realm, calling special attention to the startup-fostering conditions and policies of his home country, Israel.

Presentations from Melanie Moore and Steve Martocci posed an interesting juxtaposition, Martocci’s account of wild, fast-paced success coming as the perfect foil to Moore’s cautionary tale of Instagram-caliber expectations. Bedy Yang, David Weekly and Marta Cruz sounded off on the investment scene, acceleration, and the simple act of just getting started, and kiip’s Brian Wong talked about an element that dogs every entrepreneur’s mind from time to time: luck.

Developers, Designers and Some Healthy Competition

Within PulsoConf, the developer-centered BogotaConf also took place. It brought together engineers, programmers and developers, Spanish speakers and English natives alike, to speak the language of technology.

Of course, the conference would not have been complete without a bit of healthy competition. After 20 hours of building, Pollbag was named the victor of the PulsoConf Hackathon. And in the Startup Pitch Competition, travel planning platform SnappyGo came out ahead.

Yes, PulsoConf weekend was full of excitement and energy. But what’s important now is what happens moving forward.

As Colombian ICT Minister Diego Molano Vega indicated in his opening remarks at PulsoConf, local government has taken specific interest in the prospect of technological innovation, with numerous other countries in Latin America following suit.

Yes, Latin America is well on its way in technology and entrepreneurship, and the rest of the world is finally starting to take note. However, events like PulsoConf are indispensable in continuing to foster a culture that, while improving, remains immature.

Looking forward to next year’s PulsoConf, which will take place in Mexico City, we must acknowledge that the road ahead won’t be easy. But it’s likely that southbound traffic on this bridge we’re building is going to pick up.

Infographic: No More Glass Ceiling for the Ladies in IT
Expocietec 2012 Begins on Monday