Earlier this month, 21212 Digital Accelerator and NXTP Labs announced Latam Invasion to Silicon Valley, a Demo Day for 15 of the accelerators’ startups. Brazil’s 21212 will be taking five of its startups to the September 6th event in Mountain View, California.

Jeff Levinsohn and Frederico Lacerda of 21212 took some time out to talk to us about their plans for this flagship event.

Opening our conversation, Levinsohn explained how the idea for the Demo Day came about. NXTP Labs initiated contact and reached out to the 21212 team regarding the notion, which was sparked in large part by the revelation that a Brazilian Pavilion would be featured at the upcoming TechCrunch Disrupt. Upon further exploration, the two recognized what Levinsohn described as a “natural fit.”

In teaming up, 21212 and NXTP create a sort of complementary regional coverage that will help to raise the visibility of Latin America overall. While many of the investors, journalists and entrepreneurs present at the 21212-NXTP Labs Demo Day will be focused on Brazil, others will be more interested in Spanish-speaking locales such as Argentina and Chile.

Together, the accelerators hope to build bridges between capital, talent and entrepreneurs in Latin America and the United States. Their joint efforts have been made based upon the belief that the whole is greater than the sum of its parts.

In total, seven 21212 startups will travel to Silicon Valley, five of which will present at Demo Day: Bidcorp, EasyAula, Queremos, Igluu and WeGoOut. Site Sustentável and XJobs will be present at the TechCrunch Disrupt Brazilian Pavilion only. While some of the startups, such as Igluu, have already completed acceleration, others, like Bidcorp and EasyAula, have not. Notably, some of 21212’s top performers have decided to sit this one out, having recently completed other roadshows in the United States. 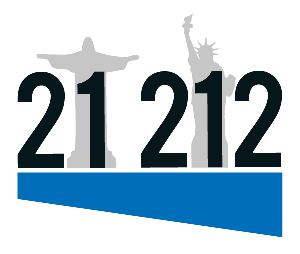 While the list of attendees for Demo Day is not set yet, Levinsohn mentioned the presence of three types of investors that will be significant to 21212’s Brazilian startups.

First, organizations like Accel Partners, which are already at least somewhat active in Brazil, and other groups such as Redpoint e.ventures and Monashees Capital with more significant experience. Second, VCs that are starting to consider the Brazilian market seriously. This includes investors who have made previous trips to Brazil in the past, including those who attended 21212’s last Rio de Janeiro Demo Day in March. Third, investors that are not interested in Brazil, or at least not enough to have made a trip or had significant prior contact. These individuals and organizations won’t spend a great amount of energy networking in the country, but they are open to checking out the event.

The recognition of this less-interested group is important as it will allow the 21212 team and the startups involved to focus on those who are more likely to invest. However, the presence of this category of individuals has an even more important value in introducing Brazil and Latin America to those who otherwise wouldn’t take note.

Given this, one of the main purposes of the 21212-NXTP Demo Day is to build excitement and awareness surrounding the startup ecosystem in Latin America. Not only is the event aimed at attracting investors, but it will also be a ramp for entrepreneurs in the U.S. to look to Latin America as an option for starting a business. Latam Invasion to Silicon Valley will demonstrate to investors and entrepreneurs alike the various opportunities at hand.

When asked how this U.S.-based Demo Day will differ from similar events held by the 21212 team in Rio de Janeiro, Lacerda pointed out that some of the companies to present will be doing so mid-acceleration. Moreover, he explained, as this is a more introductory event, pitches will be shortened in an effort to leave more time for one-on-one conversation and give attendees a general introduction to what Latin America as a region has to offer.

In its formal Demo Day in Rio de Janeiro (the next of which will take place in October), 21212 gives startups eight minutes to pitch, while in the United States, presenters will have to fit their speeches into just three. At the Rio Demo Day, both Levinsohn and Lacerda pointed out that the tone is much more formal and more serious Brazilian investors, which extensive experience in the country, attend. It is the stage for enterprises to launch their products and show traction, and the Mountain View event will serve as a bit of a dry run.

In wrapping up our conversation, we discussed the comprehensive educational vision behind Latam Invasion to Silicon Valley. The Silicon Valley visit is aimed not only at educating the U.S. technology community about Latin America but also at giving Latin American entrepreneurs and startups a chance to experience a flourishing entrepreneurial ecosystem abroad.

Levinsohn pointed out that while entrepreneurship is growing in Brazil, it cannot be compared to the energy and entrepreneurial way of life present in Silicon Valley. This trip will be an important cultural exchange for participants, who will take away countless lessons in experiencing a place where the ecosystem is already developed.

With both Demo Day and TechCrunch Disrupt, Latin American entrepreneurs will have a huge opportunity to network and mature.