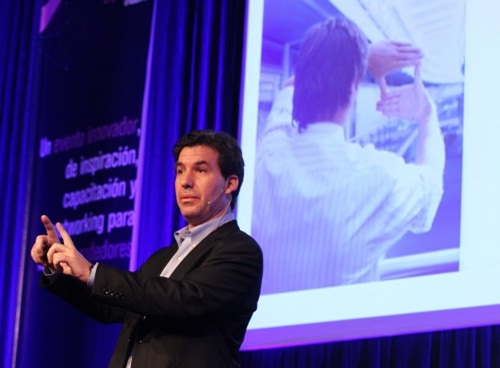 For Andy Freire, entrepreneurship is a fundamental fact of life. At the age of 40, Freire is a highly-successful social and business entrepreneur. After beginning his career at Procter & Gamble, he co-founded and headed Officenet. The company, which was acquired by Staples in 2004, revolutionized the office supply distribution industry in Latin America and has been used as a principal case study for business schools around the world.

In addition, Freire co-founded Axialent, where he served as Chairman and CEO until December of 2011. He founded Restorando.com and, in his youth, the Fundación Iniciativa (Initiative Foundation), an NGO focused on promoting leadership among Argentine youth. Today, he is the President of Endeavor in Argentina and a member of the Latin American Global Committee of the World Economic Forum. Freire formerly served as President of the Young Presidents Organization (YPO) in Argentina. He is a well-known entrepreneurial reference around the world.

PulsoSocial’s Clarisa Herrera spoke with Freire about the obstacles faced by entrepreneurs, business models and the stigma of failure.

Clarisa Herrera: Do you agree that the main problem for an entrepreneur is sitting face-to-face with an investor?

Andy Freire: It’s always dangerous to generalize. That said, I do think that’s the case. It is a challenge that is usually confronted from a standpoint of weakness. However, it is important to remember that investment seeking is a mutually-beneficial process for entrepreneurs and investors. With this in mind, we don’t need to face investors with fear but instead with respect and the conviction necessary to sustain a strong stance. Entrepreneurs may need investors, but it also works the other way around.

CH: You are in contact with entrepreneurs every single day. What do you see as the principal shortcomings of today’s entrepreneurs, and what are their greatest strengths?

AF: You’ve got to do your homework before approaching an investor in order to present a project in a way that leaves no room for doubts. Creating a business plan is a vital process for all startups, and for some entrepreneurs, this doesn’t seem to be all that clear. On the other hand, if I have to point to one strength, it would be that Argentine entrepreneurs have an extraordinary capacity to adapt to the country’s every-changing political and economic reality and seek out opportunities within it. The difficulties imposed by external situations – an economic crisis or a commercial lock-out – seem to have trained our entrepreneurs to come up with creative answers to enhance their ideas and strategies.

CH: What do you recommend for seeking financing? What variables should be kept in mind?

AF: In figuring out how to get financing, it’s important to know where to look. One has to keep in mind that there are various sources of capital in existence that can make a project happen. In general, there are three main approaches: getting your suppliers to finance you through purchases with long-term payment options, finding a capitalist partner who will take a part of the business in exchange for his or her investment, or going in with a partner who works for and invests in the company.

Though banks constitute an important source of funding for entrepreneurs, they are not usually relevant in the early stages but instead once a project is already well on its way and looking to grow and expand. This happens because banks require applicants to have assets to back the loans taken out, thus reducing risk. New startups don’t generally meet these requirements. Banks see startups as a risky investment. There is nothing available to show the evolution of a project, and results are difficult to predict.

CH: How does one go about reaching investors who are more willing to take a risk?

AF: Investors have to trust in the vision and abilities of an entrepreneur – without that trust, they won’t put in even one cent. They understand the priorities of early-stage businesses and are patient with respect to results. Nevertheless, getting an investor requires a great amount of work, preparation and planning. You have to show that you are the right person to take a project forward and be able to answer the big question: Why is this entrepreneurial team going to be successful?

CH: Are you more inclined towards copycats or market-revolutionizing ideas?

AF: Studies show that 90% of ideas come from something an entrepreneur has been working on previously. Only 10% emerge from a so-called flash of inspiration. What do we do when we decide to undertake a project? We search for a great idea – that wonderful, unique and brilliant idea – that no one has ever had, that disrupts the market entirely. I think that the mechanics behind the expectation of some great enlightenment can be dangerous if they lead us to a dynamic of think, think, think instead of do, do, do. I think that everyone who wants a startup should set off with a deductive process of action instead of contemplation. This is a methodical process for understanding competitive advantages, motivating passions and the sectors where one can really shine in putting something on the market that doesn’t currently exist. With this perspective, it’s best to consider ideas for their potential to exploit particular contexts, not having to do with whether they are copycats or new.

CH: Does a copycat imply less risk if the original is successful?

AF: It’s best to escape dichotomies and get to the root of issues. If you ask me whether it’s better to bet on copycats or market-disrupting ideas, my answer is that it’s best to bet on ideas that have some degree of originality (this does not exclude copycats), that exploit opportunity, that are backed by teams that can demonstrate a potential for success, that can grow in the future and that are oriented towards the market. It doesn’t matter what model they’re following.

It’s not entirely true that a copycat implies less risk if it has been successful somewhere else. There are numerous cases of startups that are hugely successful in one place and fail in another. That’s why it’s important to analyze how adequate an idea is in a specific environment, whether it’s an adaptation or an original concept.

CH: How does one escape a culture that stigmatizes failure?

AF: Failure must be learned – there’s no other healthy way to live with it. It’s normal to come across cases in which entrepreneurs are frustrated and embarrassed, thus losing the confidence needed to keep trying. Among Argentine entrepreneurs, and in Argentine society in general, there is a certain stigma when it comes to failure. Dealing with it is a skill entrepreneurs must acquire, imitating other parts of the world. In the United States, for example, there is a completely different philosophy surrounding the issue. There, when entrepreneurs fail, they don’t hide it. Instead, they highlight it on their resumes because it is considered a value-adding experience. The challenge isn’t explaining what has been learned from failure – that depends on each individual case – but instead understanding that failure is part of the process for those willing to take risks and try.

AppCircus São Paulo Finalists Announced
João Otero: “We build the kinds of experiences that we ourselves would like to have”