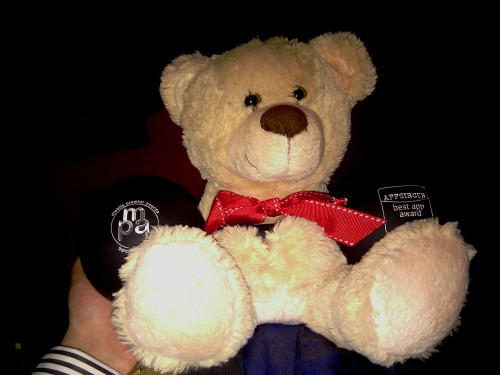 As we reported few days ago in PulsoSocial, mobile application Bear Care received the distinction ‘Best App of the Year’ at the Mobile Premier Awards 2012, held at Sala Apolo in Barcelona, Spain.

This mobile application from Lithuania, is an augmented reality action game, in which you have to protect a defenseless teddy bear. Šarūnas Ledas, member of the team who developed Bear Care, talked to PulsoSocial about the project and their goals after winning Mobile Premier Awards.

Alexandra Ximenez:  How and when did you have the idea to develop Bear Care game?
Šarūnas Ledas: The basic idea was born more than a year ago, when a couple of my friend game developers and I have decided to make several small games and have a three-game pack. At that time I had an idea of a simple 2D game, which featured a teddy bear that is attacked by evil bears. About a year later (around four months ago), my brother and I decided to participate in an international app development competition App Camp, in which a new app had to be made within a weekend. So, we needed a simple idea, but wanted to add some innovation to it and also make a game, not a utility app. Therefore, we decided that augmented reality should help bring a new dimension to the game that we would develop and I also thought that the teddy bear defender idea would be great for this kind of timeframe and technology. After App Camp, we thought that the game needed something additional, so we decided to add a pet-care simulation, in which the player has to care for the bear, play with him, feed him and so on. And that is how the final concept was born.

AX: Who are part of the developing team of BearCare?
ŠL: The team is called Tag of Joy and there are four people working on Bear Care, two programmers, a 2D/3D artist and an animator.

AX: We know Bear Care is not available yet, when are you releasing the final product?
ŠL:  The final release date isn’t set in stone yet, so I can’t say exactly. But we are planning to launch within several months. However, there are still lots of things that have to be done, including marketing and finalizing.

AX: After winning AppCircus and MPA, are you planning to attend other competitions (like AppCircus)?
ŠL: At the moment we don’t have concrete plans to participate in other competitions, but we aren’t against any, so if something comes up, we might have a go.

AX: What are Bear Care goals for 2012?
ŠL: The main goal is to polish, finalize and release the game in 2012. There are lots of ideas how to promote and spread the game all over the world, so we will concentrate on that and also on making a great game.

This is a video of how Bear Care will look when we get the chance to play with the nice teddy bear.