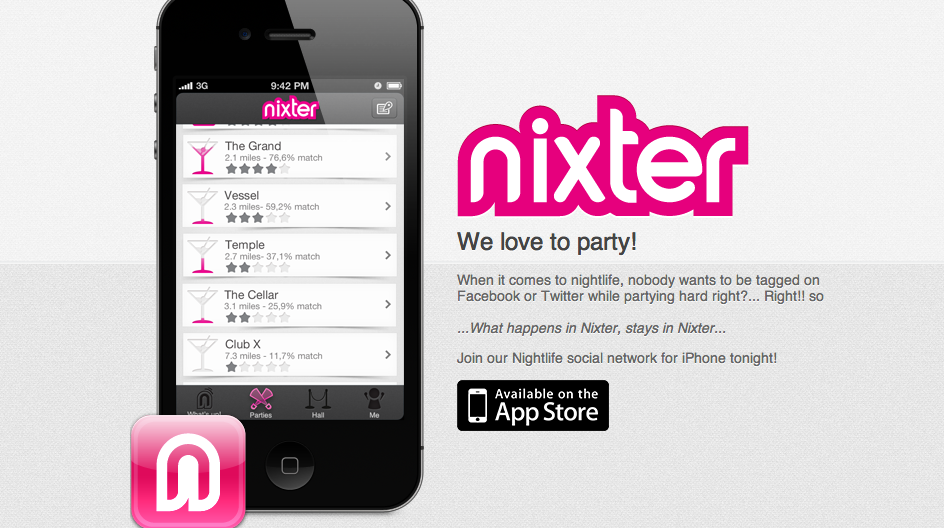 In 2009, as nightclub promoters in Santiago, Chile, Francisco Saez and his brother dreamed up a loyalty card initiative for clubbers in Santiago.  After six months, they had built a respectable business with more than 3000 customers paying the $10 yearly membership fee.  Nevertheless, two years later and after adding some engineering talent, Francisco is looking to improve the clubbing experience with a new startup called Nixter.

For users, the company has developed a software app that works on a number of mobile devices (in addition to the web).  Through check-ins and other actions, user tastes are tracked and can be targeted by club owners.  The latter access back-end platform to target select customers, reward them with credits and special offers and measure results.

Though in beta in Chile, the official launch is scheduled for January 19th in San Francisco with 10 premium nightclubs already signed up.  According to Francisco, nightclubs around the world spend over $1B dollars yearly on marketing activities.  A notable team member is 16 year old CTO, Francisco Yarad who, as reported by AndesBeat, recently published Chile’s most popular iPad app called Canal 13.

Though Foursquare, Yelp and others target markets that include these types of venues, Francisco sees room for an offering focused specifically on clubs, particularly for party goers visiting new cities. Nixter will include the ability to rank parties in real-time providing users with up to the minute status on different party options.  Also, other features will help partygoers to meet new people and to invite friends for additional credits.

With the help of the Chilean government, the Nixter team will be working out of Silicon Valley’s Plug and Play Tech Center from January to March as they launch the product and line up an additional $1M in funding. To date, the company has received a bit over $100k in Angel funding within Chile.