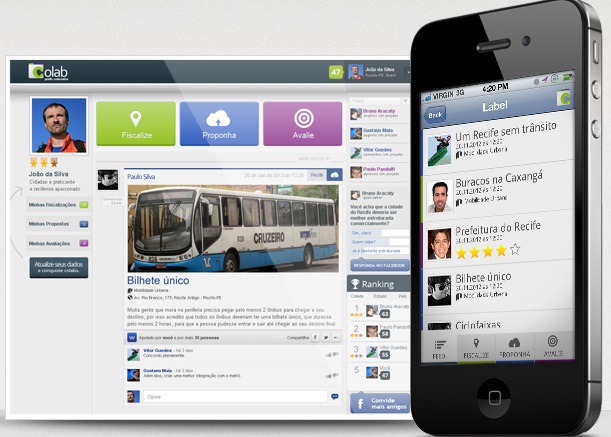 Colab was announced the winner of the AppMyCity competition at the 2013 New Cities Summit yesterday in São Paulo. The Brazilian-born project beat out two other finalists from the United States and Israel to be named the world’s most city-friendly app.

AppMyCity is a contest for mobile apps that improve urban life. Last month, we revealed the list of the competition semi-finalists – a total of 10, including four apps out of Brazil.

So what’s the story on the winner, Colab? Based in Recife, Colab is a social network for cities. It serves as a bridge between citizens and government entities, helping them to, together, foster better environments in which to work and live.

Colab’s product is based on three principal pillars:

–Evaluation: Allowing for ratings of and feedback on public services.

The app was developed by Bruno Aracaty, Gustavo Maia, Paulo Pandolfi, Josemando Sobral and Vitor Guedes, from Recife and São Paulo. It is available for iOS, Android and Facebook.

Upon being a selected a finalist in the AppMyCity competition, Colab co-founder Gustavo Maia remarked:

Colab is very happy to be selected as one of the finalists for the AppMyCity Prize. It will be an honor to present our social network for citizenship to global leaders in this great event held in our home country this year. We would like to thank New Cities Foundation and everyone involved in the Prize. We are very confident that this is a huge opportunity to start connect smart citizens to more smart cities worldwide.

The team must be even more thrilled with its win. As part of its AppMyCity victory, the Colab team will receive US$5,000 to further develop its app.