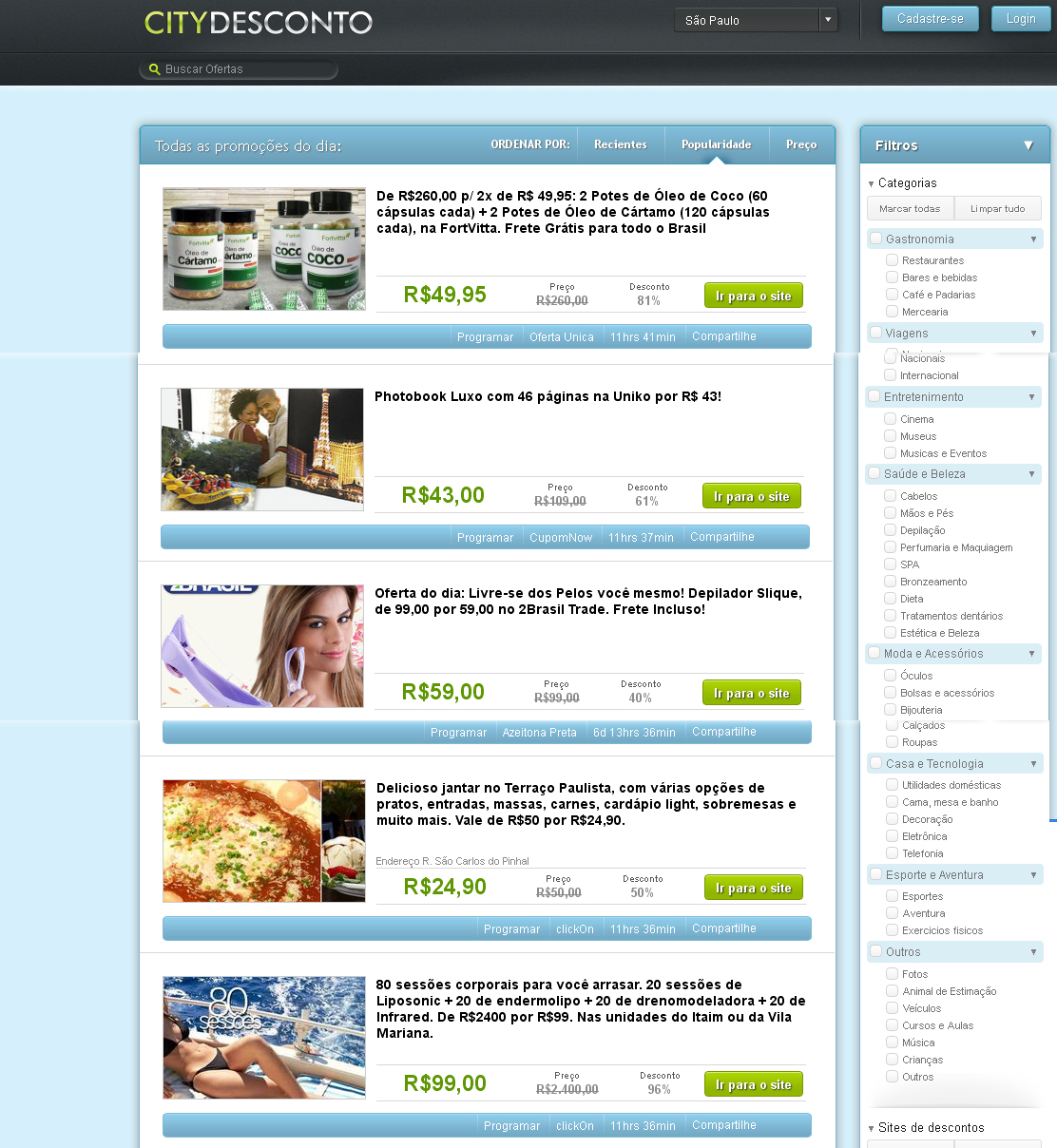 The daily deal market has exploded. After Groupon opened the door, hundreds upon hundreds of enterprises have followed suit, offering endless discounts and sales to consumers from around the world. In Latin America, the concept has fared extremely well, even after Groupon’s surprising market decline.

Having conquered much of Spanish-speaking Latin America, the Descuentocity team has now set its sights on the region’s most coveted market: Brazil. This week, the company launched Citydesconto in the country.

Brazil’s daily deal market represents a huge opportunity, having taken off exponentially following the success of Peixe Urbano. There are over 500 coupon platforms and sites present in the country today, and estimated 300 of which are profitable. In 2011, the daily deal market in Brazil had an estimated worth of US$843 million, and this year, that number is on the rise.

Andrés Malenky, Co-Founder of Descuentocity, gave us some insight as to the company’s experiences in and plans for Brazil.

Emily Stewart: You’ve already established a strong presence in several Latin American locales. How has roll-out been different in Brazil?

Andrés Malenky: When you focus on daily deals, you must understand that each country is different. For example, in Argentina, people are more interested in tourism deals than in Chile. In both countries, food is a major category. In Colombia, for example, there is a greater appeal for beauty and health deals. But this variation around cities and countries is not only related to people’s tastes. There is obviously a great difference in acquisition costs and activity on our site. Descuentocity.com also has a social deal network that has diverse results in each country.

Brazil is a huge market. There are about 500 daily deal sites and thousands of daily deals, so finding the best deal is harder there than in other countries. We sort all deals according to our users’ preferences and their activities on our website so that users can easily find the best deals for them. It will be a key issue for us to understand our visitors and provide them with a great user experience.

Citydesconto.com.br has had good statistics since its launch, so we will keep up on our investment.

ES: Brazil is generally viewed as one of the more difficult markets to penetrate today, largely due to bureaucratic, legal and economic barriers. What has your experience been with that?

AM: We focus on demand and our users. There are thousands of strong companies in Brazil, so we do not believe this will be a key issue for Citydesconto. In comparison to other Latin American countries, we have had a reasonable experience in Brazil. Our team has Brazilian employees with great networks in the country.

AM: Reaching 50,000 or 100,000 users is not the key issue. The main challenge is to obtain users with good statistics in terms of their activity on our website in comparison to their acquisition costs. We are very focused on our goals, and we always work hard to achieve them. We will continue working with our main marketing providers, like Google and Facebook, but it will also be important to partner with local ad networks.

ES: Many daily deal platforms have crashed and burned. How do you plan to combat this?

AM: As a partner of daily deal sites, we rely on their results as well as user demand for deals. The daily deal concept has been in existence for a while now, but daily deals as a market itself is less than than three years old. The daily deals concept has been revolutionary for most users that never imagined these kinds of discounts and deals, and it is a great marketing alternative for businesses to promote themselves. We believe that users will always demand good deals.

With new features to come, better service for businesses and a big mass of users that translate to sales, we expect that the market will remain significant in terms of size. In the initial years, many deal sites have focused aggressively on capturing new clients. Now, most deal sites are focused on sales and improving their financial results. In this environment, we are working to make the task of finding deals easy for our users while at the same time improving our partners’ results and financial indicators.