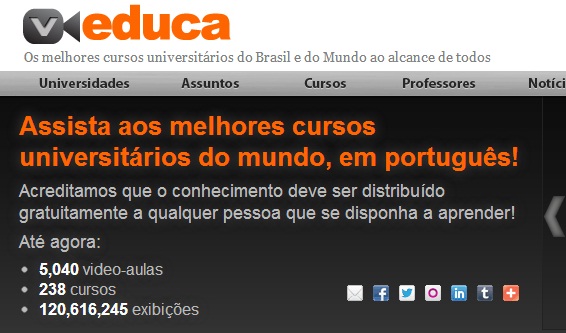 Brazilian online education platform Veduca has announced an investment. Mountain do Brasil, a subsidiary of Swiss investment group Mountain Partners, and 500 Startups have combined to provide the startup with US$750,000 (R$1.5 million) in funding.

Carlos Souza, who currently acts as Veduca’s CEO, founded the company alongside André Tachian, Eduardo Zancul and Marcelo Mejlachowicz with the purpose of democratizing quality education via online video. Since its launch in March of this year, the startup has achieved one million unique visitors per month and five million views. Notably, all of this has come without any advertising work.

Veduca has now built a library of over 5,000 videos. It features content from 13 of the world’s top universities, including Columbia, MIT and Yale. The platform is divided into 21 academic categories, and English-language classes are streamed with Portuguese subtitles.

It is important to note that Veduca was one of the several Brazilian startups to travel to TechCrunch Disrupt last month. There, the company was approached by several partners and investors. Much of Veduca’s investment success has come as a result of its implementation of innovative technologies, including its search algorithm and association with news content. The size of Brazil’s educational market – 6.1 million students, 240,000 university professors and 18 million people with college degrees – can’t have hurt either.

Moving forward, Veduca will use the investment to develop new technologies to relate video content and news. It will also improve its video collection, improve Portuguese subtitles and produce subtitles in Spanish. Both 500 Startups and Mountain do Brasil will receive equity in the startup, though percentages have not been revealed.