Next Friday, the Evernote DevCup 2012 finals will take place at the Evernote Trunk Conference in San Francisco. There, six projects will compete – five apps that have been selected by a panel of judges, and one, Spotwish Go!, that was chosen by the public. An interesting occurrence considering the app has yet to launch.

Spotwish Go! is a mobile app that helps users to find friends nearby and plan activities.

The app broadcasts information about a user’s activities to friends and contacts nearby. If someone joins the activity, a geolocated memory is created for the activity, and all involved can share pictures of and comments about it. Moreover, the app remembers events, so when a user passes by a specific location weeks or months later, Spotwish Go! reminds him or her of those geolocated memories.

The application will officially launch a week from today on Thursday, August 23rd. It will initially work with Android and will become available for iPhone later down the line.

Spotwish Go! is just one of several products being developed to eventually be included in a single larger Spotwish app, a personal recommendation system based on geolocation and algorithms of interest with a geomarketing business model. First, however, Spotwish will launch two other subset apps: geolocation-based recommendation system Spotwish Me! And match application Spotwish Wink! These, along with Spotwish Go!, will later evolve into the single Spotwish app.

Spotwish joins the plethora of geolocation applications currently in the works or already on the market. Led by foursquare, the geolocation market is still quite fragmented and evolving. The Spotwish team is now seeking to stand out from the crowd.

João Otero, founder of Spotwish, gave us some insight into the ready-to-launch app as well as his experiences with the Evernote DevCup. 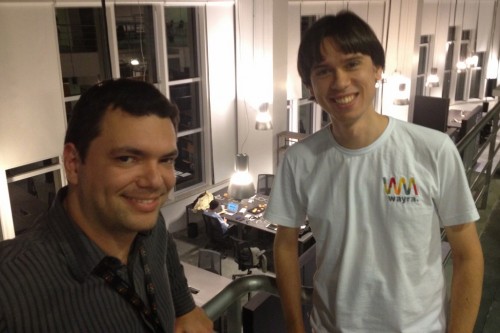 Emily Stewart: Spotwish was named the public’s choice of the Evernote DevCup. What has that indicated for you in terms of where you’re going with the app? How do you take the fact that you were not otherwise selected by the panel of judges? How does all of this weigh out to you?

João Otero: We were already building Spotwish when there was a hackathon sponsored by Evernote and BlueVia. We won second place at that hackathon and received the invitation to compete in DevCup from the Evernote guys themselves – they liked the social layer we had built and told us that our idea was above average, having real chances to win.

That has motivated us to change our schedule and try to build a better integration for our software with Evernote. We didn’t have much time, but we were able to send out a basic working version. So, we played by the book, and our strategy was to focus on the people’s choice, hoping that meanwhile we could improve the product a little bit more if we were selected. Of course, we asked our friends to vote, as everyone else did. We started out with a simple campaign, but suddenly it evolved by itself, and then we got those amazing 9000 votes!

Even though the app wasn’t perfect, people’s interest was so intense that it proved one very important premise: users want what we are building. And this is our biggest motivation, because we really want to bring value to people’s lives.

So, after that feedback, we stopped our parallel projects and took the time to fully focus on Spotwish Go! In order to improve our product even further, and we plan to launch it during the Evernote Trunk Conference.

ES: How does Spotwish interact with Evernote? Can it stand alone?

JO: Spotwish doesn’t require Evernote, but it can benefit a lot from it.

It uses Evernote as a shared storage system for memories. The app also puts a social layer on Evernote, since it didn’t have social functionalities before. Basically, all the «memories» that one creates with friends during an activity can be stored on his or her Evernote account (the single place that you record all your memories can also be used to store your data from Spotwish and search for it later).

ES: What is your target audience with Spotwish?

JO: Well, we are just launching the first version and we don’t know much yet about on which demographics it’s going to focus most. Our expectations are for young people, who have time and friends and are open-minded and social. People who sometimes want to play basketball or the guitar and just need someone nice to join them at that moment. We are going to launch it in Portuguese, English and Spanish.

ES: What are your plans for the rest of the year and next?

JO: Besides continuing to improve Spotwish Go!, we plan to launch Spotwish Me! and Spotwish Wink! within the next two months. We simply love building Spotwish, and we are really focusing on trying to improve people’s real-life experiences.

Success, for us, is finding people that enjoy our apps and being helpful in improving their lives. We build the kinds of experiences that we ourselves would like to have, and we strongly believe that many other people feel the same way.

Has the Spotwish Go! product been refined enough to come out on top at next week’s DevCup finals? We’ll have to wait until next week to find out.