The Brazilian startup community is gearing up for its newest edition of Campus Party, which will soon take place for the first time in Brazil in a location other than São Paolo. From July 26th to July 30th, Campus Party will take the northeastern city of Recife by storm, bringing in entrepreneurs, investors and developers from the area and around the world.

This special edition of Campus Party Recife will be held at the Pernambuco Convention Center and Chevrolet Hall, which organizers plan to fill with 2,000 campuseiros (the nickname given to attendees). Inscription for the event comes at a cost of $R200 – a price well worth it considering all it has to offer. And as this goes to press, it looks like just 55 more spaces are open, so those interested in attending should get moving. 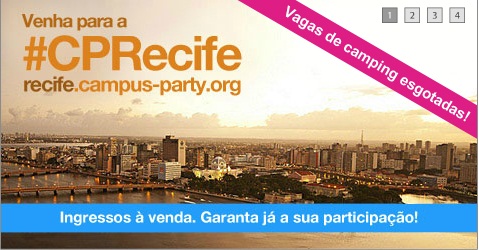 Various events and competitions will take place within the framework of Campus Party Recife.

Campuseiros will have the opportunity to compete in a number of contests over the course of the event, including Campus Game Jam and Robótica Livre. Competitions surrounding games like Street Fighter for Xbox and League of Legends for PC also promise a good time. Wayra will be heading to Recife as well for the Wayra Contest in which judges will evaluate and award business proposals and ideas. There is also quite a bit of buzz surrounding the Campus Party Recife Hackathon.

On a more pressing note, inscriptions for one of the main complementary events of Campus Party Recife – Geeks on Campus – close today. Technology networking organizer and happy hour coordinator Geeks on Beer has teamed up with Campus Party to organize the meet up, which will take place on Friday, July 27th at 8:15 p.m.

The two-hour networking event will have a speed dating setup, allowing 18 selected startups to have five-minute meetings with six investors in hopes of piquing interest and eventually receiving funds. Cadu de Castro Alvez, Geeks on Beer organizer, explains the event’s purpose, “The goal of Geeks on Beer is to bridge the gap between entrepreneurs and investors. By partnering with Campus Party, we are able to take full advantage of the experience and contacts gained over the year spent in planning for the event in order to foster the ecosystem of the northeast, which has great technological potential.”

Applications to become one of the 18 startups selected to participate in Geeks on Campus are set to close at midnight tonight. Those looking to make a last minute go of it can do so here.

Geeks on Campus is just one of the many events that will be featured at Campus Party Recife. We at PulsoSocial will be sure to keep you updated as things progress.