Well-known Dropbox and Airbnb emerged from startup accelerators, the model for which has gained increasing popularity since Y Combinator came to be just seven years ago and quickly became an international point of reference for such businesses. Accelerators seek win-win relationships that are profitable not only for investors but also for entrepreneurs, who have ideas, talent and energy but lack the necessary financial means and business knowledge to get their companies off the ground relatively quickly.

In reality, the model of financing and seeking investment capital to start a company is nothing new in the business world – it goes on in a number of industries. However, it has taken full force in recent years, thanks in large part to the explosion of fast-growing technology companies. Such enterprises possess the characteristics necessary to propagate at rapid, almost inhuman, rates.

Just like everything in the digital era, the Y Combinator model has been replicated and cloned. And today, Latin America boasts a number of accelerators of international caliber, including Wayra, Endeavor, Founder Institute, MIT and 500 Startups. The arrival of these organizations has facilitated the structuring of an entrepreneurial ecosystem that is contagious in inspiring business creation and digital product development.

Nevertheless, there remains a group of individuals who are able to, or decide to, start their digital businesses without the aid of mentors or investors. What are the advantages and disadvantages of each model? To answer this question, we spoke with two different entrepreneurs who have each path and learned about their very distinct experiences, which they recently discussed at Colombia’s recent Campus Party. 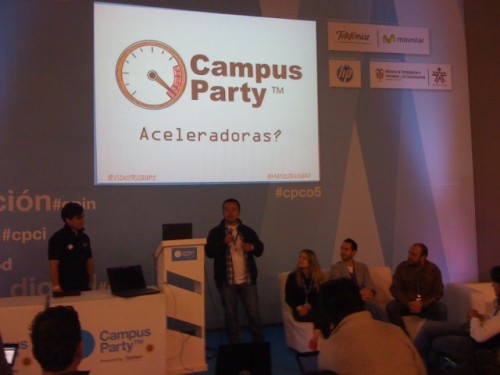 At Cuponidad, what we did was to take an idea that had proven successful in another country and copy it. We didn’t receive any help from investment capital or advisors. I think that the advantage offered by this decision was that it allowed us to proceed quite calmly without generating any debts. That said, it did put the pressure on, because we invested every last dime we had in the project, and when you don’t have any backing, the risk is enormous. In our case, we found out about Groupon’s arrival in Colombia within just a few days of the launch of Cuponidad. These are situations that are hard to deal with when you don’t have advisors.

Another obstacle for unfinanced companies is gaining trust from possible vendors and partners. If you don’t have a big name behind you, you may be perceived as lacking a solid foundation. This was our biggest challenge, but we were able to overcome it. However, there’s no doubt in my mind that having a good name backing us would have made things easier.

Last but not least is the issue of not having a network of contacts. This is one of the principal advantages of participating in an accelerator, because the minute you’re in, you get a direct line to a huge network. Having access to so many individuals who know about businesses and have lots of contacts themselves is one of the most valuable aspects of being in an accelerator. You’ve also got business resources right at your fingertips, even just when it comes to terminology – education you’ll get on your own if you forego acceleration, but slowly.

Even though we at Cuponidad lacked that network and advice, we made it. Was the process slower? Of course. But we’re happy with the end result.

My experience in an accelerator has been very enriching. First and foremost, I would advise all who are interested in getting involved in and applying to an acceleration program to think beyond a simple idea sketched out on a piece of paper – it takes a lot more than that to be selected. Prior to getting into an acceleration process, it’s important to have a solid team and a relatively mature idea, as well as a prototype. You’ve also got to ask yourself very seriously why you want to be accelerated, what type of a business you want to have, and why you want to have it.

In my opinion, one of the best parts of being in an accelerator is the mentorship provided. This is one of the factors that really speed up the process, although it also adds pressure, of course. The stress helps you to learn, though, making you pivot as many times as you need, refine your business model quickly and react fast to time crunches.

On the other hand, the process implies a lot of questioning. You are set up to be judged by various individuals deemed as experts, and your own ideas are basically seen as a rough draft of the final product. This format leaves you with a mass of opinions around your project and often leads you to overanalyze what you’re doing, going back and forth a lot with your idea. You can become so afraid of being judged that you lose your motivation to keep testing things out.

You also have to learn that there are people you should listen to and people you have to ignore. If you heed to every single opinion, the process is going to be slowed, and the pressure will become unbearable. You can’t let yourself be confused. You must remain firm while at the same time taking in the opinions that will prove most valuable in bettering your product down the line. My advice is that everyone with a strong prototype and defined business model should get involved in an accelerator.

Within just two months of getting to know this dynamic world of technology entrepreneurship, it is my opinion that accelerators, beyond being places where people receive funds and business education, are real idea labs. Accelerators are environments in which you are constantly solving problems, and not only technical ones. You have to put your abilities to the test in various areas – public relations, getting clients, implementing improvements, increasing users, attending events and a number of other activities that render startup culture what it is: an environment anyone can get involved in, because you learn through practice.

This symbiosis at the heart of startup culture has made possible the union between those who can create and those who can do business. This alliance comes to life in startup accelerators, which are boiling over right now in Latin America as the source of the best minds and ideas in the region.