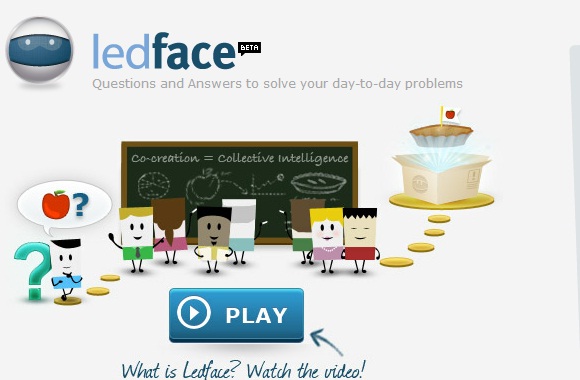 On January 31st of this year, we at PulsoSocial announced the Top 10 Startups in Latin America. The group was narrowed down from 121 applicants and selected from 20 semifinalists from throughout the region. We also opened up a fan favorites competition, asking our readers to vote for the startups they deemed most intriguing.

Though Brazilian startup Ledface didn’t make our top 10 in January, it did make it into the top five of reader preferences, coming in at number three. And given its nature as a platform dependent entirely upon user experience and draw, this is probably a good sign.

I got a chance to speak with Ledface Founder and CEO Horacio Poblete to find out more about the platform itself as well as what its team hopes will set it apart from the tough competition already on the market.

Emily Stewart: Could you tell us a bit about Ledface’s beginnings? Where did the idea spring from, and how did the company start off?

Horacio Poblete: I was watching Wall-E from Disney Pixar in 2008 when I had the idea. It would be amazing if we could have super artificial intelligence that could help us in our daily tasks. At that time, I was in the very beginning of my first startup, so I couldn’t dedicate myself to this new idea. However, studied the topic over the next two years and realized that – as Steve Wozniak said – we are light-years away from true artificial intelligence, something that can go to your house and make a simple cup of coffee. The problem is that 99% of AI is reductionist, dividing the problem into small parts. Reductionism is great for linear problems but not for multi-dimensional domains like economy, climate, intelligence, etc. So currently AI solves very complex problems in very simple environments. But life is the opposite… to fry an egg for example: a simple task in a very complex environment.

ES: The number of visitors to Ledface up to now is somewhat low. What strategies are you looking to implement to increase that number as well as the number of questions on the platform? Are you considering reformulating the business model or manner of interaction on Ledface?

HP: We haven’t spent a single dollar on marketing yet. Since we launched in October 2011, we have been preparing to scale. We raised our retention rate from 10% to 20%, and our activation rate (people that come to the site and register) went from 8% to 19%. It would not be wise to spend money to promote something with low activation and retention rates. We did our homework and are now just one month away of having the magic numbers needed to start spreading the word.

What you currently see online is the tip of the iceberg. Our challenge from now on is to grow the user base to create critical masses in different domains.

Before the end of the year, we plan to give users something completely disruptive. A clue: when you ask or decide to answer a question, you are, in fact, interacting indirectly with someone. You are building a link with that person – an intrinsic affinity link. As you keep interacting, you build a circle of trust, people that you always answer or that are always helping you. They don’t know your name or who you are, but they are connected to you by real interests.

ES: The big player in this field is Quora. How do you plan to compete with it and other sites of the sort, and how does Ledface stand out?

HP: Quora is all about ego and personal marketing, «I’m good, you are not.» That’s the spirit. Ledface is about co-creation, about sharing knowledge. That’s why our co-creation process is anonymous. Ledface knows who is qualified to answer, but the co-creation process itself goes beyond ego. You are free to collaborate and be yourself.

Quora is still a closed beta. Why? Maybe because when they open to the world and millions and millions of users go there, they will experience a lot of noise followed by a drop in quality. This happens because anyone can answer. At Ledface, the more people the merrier, anyone can ask. It’s Ledface, however, that ultimately picks the best group to co-create the answer. So the more people, the more chances we have of getting the right match.

In July, Ledface will be launching a groups feature that brings together users with knowledge on and interest in various topics, such as parenting, relationships, health, travel, sustainability and fashion. Users will also be allowed to create closed groups aimed at companies and employees seeking assistance but hesitant about asking for help directly. It is important to note that users will remain completely anonymous in these groups, which should foster greater confidence in sharing knowledge without risking revealing one’s identity.

In its relatively early stages, it is clear that Ledface still has some growing to do. Time will tell how its approach of artificial and collective intelligence will fare on the market. Nevertheless, the logic and creativity behind the platform render it a commendable and unique endeavor.