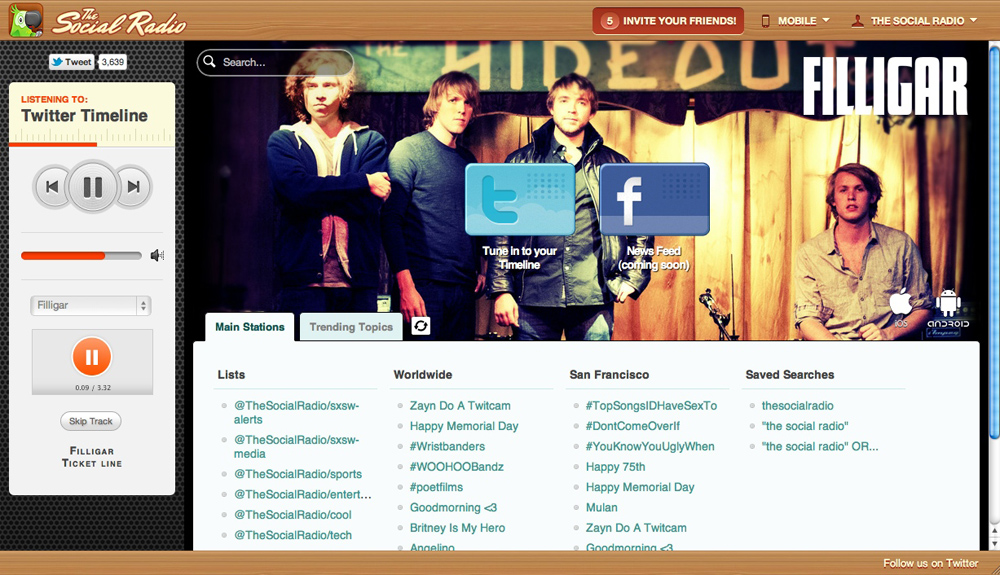 Starting this week, The Social Radio, which lets you listen to your tweets mixed in with your favorite music, will be taking another step in innovation with the launch of a new feature on its web-based app. The “Independent Bands Promotion” feature provides musicians the opportunity to be heard by thousands of people from all over the world through an original platform, which has already been downloaded 20,000 times.

It’s hard for independent bands to start their careers and reach an audience in relatively short periods of time. Moreover, it’s expensive. This new feature will give musicians the chance to grow their communities of listeners by mixing band singles with Twitter streams.

Any band interested in participating in this project can request to be the featured band of the month through the “Submit Content” link on the website.

As mentioned, The Social Radio app has already been downloaded 20,000 times all over the globe (USA, Spain, Brazil, France, Italy, etc.). Given these numbers, it clearly represents an amazing opportunity for bands to share their music and engage with their fans in a new way.

The betatest for this feature was performed with FILLIGAR, a Chicago-based rock band formed by three brothers and a lifelong friend. FILLIGAR’s last album was nominated this year as Best Rock Album at the Independent Music Awards, and the band was named one of the Top 8 live acts in the USA by the RSL music blog.

“When Pete from Filligar came to us, we heard his music and it was just awesome. We knew that we had to start a project with them,” said CEO Roberto Gluck.

If listeners want to know more about the band playing, they can read its bio and find out more about its discography right in the app. They can even download free songs.

Those who tune in to The Social Radio through the traditional URL will also enjoy this new feature. The site will schedule songs from the band, and the app will frequently reproduce them.

Any band looking for new ways to engage with fans can be featured on The Social Radio. They just have to send an email to bands@thesocialradio.com with some of their best singles. With this, the possibility of reaching the crowd is essentially at their fingertips.

The Social Radio is a web, iOS and Android app that converts social streams into audio. It allows you to listen to your tweets, lists and trending topics mixed with the music you love on the web or your mobile device.

The Social Radio Project kicked off in 2011 when a group of college friends dared to launch their idea to the whole world. The app has been downloaded 20,000 times from more than 20 different countries.