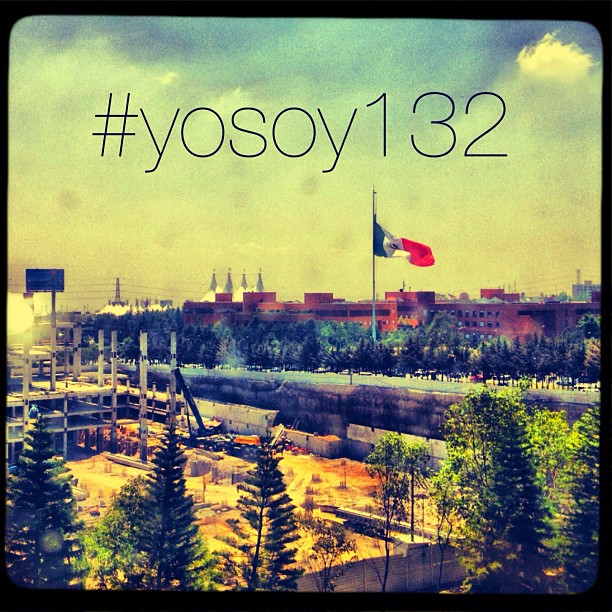 There are four parties contesting the presidential chair PAN, PRD, PRI, PANAL; President and many other positions as congressman, senators, governors, etc. will be elected on July 1. Social networks have been an important gauge of the social pulse, and even before initiated the campaigns oficially, on twitter and facebook, some candidates were contesting popularity.

But as social networks are useful to make campaign in favor or against any of them: Enrique Peña Nieto, Josefina Vazquez Mota, Andres Manuel Lopez Obrador and Gabriel Quadri, also served to demonstrate the  media manipulation in Mexico. While we read a thing on the Internet, or watch videos about an electoral event,  in newspapers and television news programs claim others (or do not bother to discuss many topics), surveys are inflated in many newspapers by giving  total percentages up to 113% (yes, mathmagicians!).

But in the same way, social networks help to replicate the disgust of society to a campaign increasingly turbid and in which broadcasters have played an evident part of the game. The first case was that the transmission of the presidential debate was not mandatory for the 2 national television broadcasters, many twitter users protests against this. The reasons: that every person should be able to see the debate, to make a choice based on criteria. Television networks didn’t care, one of them Canal de las Estrellas show a talent program with children named «Pequeños Gigantes», the other one, Canal13 TvAzteca, a football match. An even the owner and president of the last one, Ricardo Salinas twitted: «If you want to watch debate, watch it on Televisa, if you don’t, watch football in Azteca. I’ll give you the ratings tomorrow».

The second case (although there are several others), is the visit that presidential candidate Enrique Peña Nieto made to Universidad Iberoamericana few days ago, and  unleashed a maelstrom that has not stopped and took several students from various universities in Mexico City to march against Televisa and this candidate today.

What happened? At the Universidad Iberoamericana, EPN appeared to present his proposals and sustain a dialogue with the university community, as other candidates made the same appearances in other institutions. But this time, the feeling of disgust and rejection was palpable against this character, who avoided answering questions directly, and between protests,  the candidate and his team, were forced to «fled out» of the place.

The videos of testimonials, show students protesting only with their voices: «Ibero doesn’t like you» «Out, out» «Coward» or «Murderer» (the latter related to the Atenco case), and this event, instead of rising the voices in national media, seems like the party gave guideline to them, to minimize the protest and even say that students were actually vandals in favor of other candidates like Josefina Vazquez or Andres Manuel Lopez.

On Twitter and Facebook, and Internet channels, clarification has been made many times, that all were students at the Ibero, who acted willingly and to prove the creation of several HT #somosmásde131 #YoSoy132 among others, as well as #EPNLaIberoNoTeQuiere.

Today, students from different universities, some of them very recognized, promoted a walk from their institutions to the facilities of Televisa, this company is accused by students -and great part of society- of wanting to impose the PRI candidate for President of Mexico. With slogans such as: «Students united, will never be defeated», «We are not 1, we are not 10, corrupt media count again»,» Mexico wake up», and many of them hold their Student ID, to prove they are actually students, not hoolingans or part of a political party.

The HT #yosoy132 was placed as TT, national and global scale, since the information for the HT  was not only in Spanish, but in English and French.

Social networks are proving to be a powerful tool, and although Mexico we’re still a minority (about 40 million Internet users and about 115 million habitants), little by little the information reaches the hands of more people.

What do you think of the protests either virtual or real? Do you believe they are worthy?  Do you think that in these elections, social networks will play/are playing a key role? I would like to have your opinion.