Square Enix, with headquarters in Tokyo, Japan, develops, publishes and distributes entertainment content including interactive entertainment software and publications in Asia, America and Europe, which make them one of the most influential providers of digital entertainment content in the world and continues to push the boundaries of creativity and innovation. Square Enix has brought two of Japans’s best-selling franchises – Final Fantasy and Dragon Quest which sold over 85 million and 50 million units worldwide respectively.

The Square Enix Group operates a global network of leading development studios and has an impressive portafolio of intellectual property, including: Final Fantasy, Dragon Quest, Tomb Raider and even the legendary Space Invaders.

Now, why in the world am I telling you all of this!?

Because Square Enix is now here, looking to tap the Latin American creativity, geo-location, talent and even, maybe -just maybe- set one of their studios in a LatAm country, that can give them all the latter or certain advantages.

This is a company that ended 2011 with USD $1.6 billion in revenues, between their digital entertainment, amusement, publication and merchandising divisions. What is the reason to set a studio or make a contest to find where is the «hotspot» in our region? Simple, take a look at the map: 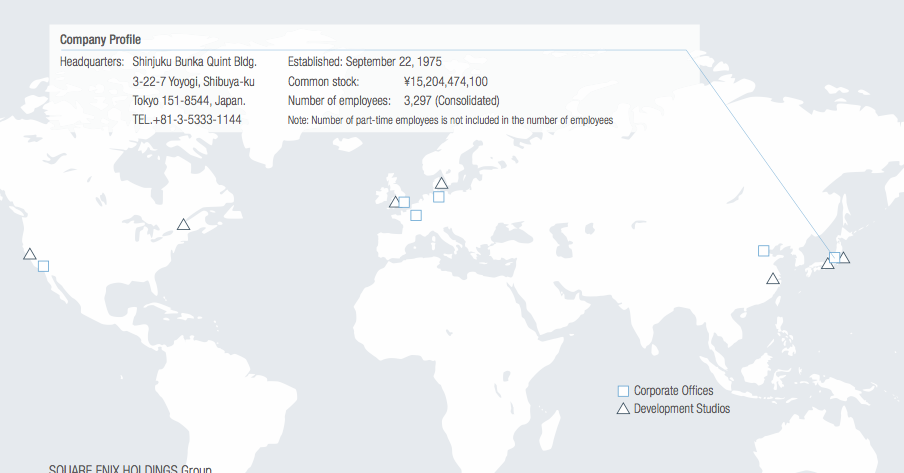 They have corporate offices and development studios in almost every continent and strategic countries. But there seems to be a lack of them and a big blank in LATAM. Don’t you think?

A contest, brings back the success of their very beginning

It is said that the company actually started in Japan with a contest. A contest that brought together hundreds of developers that were finally recruited to form the company from which Dragon Quest was born. Now, it seems that they are looking to scout and see if this can be repeated through Latin America. The Latin America Game Contest 2012 of Square Enix wants to bring out the best games from Latin America to the world; with a grand prize of USD $20,000, an Excellence Award of USD $10,000 and a Runner Up Award of $5,000 USD.

The rules are simple, develop a game for Android, iOS, Windows Phone or web, of any genre, in spanish, portuguese or english. Any individual, group and organizations settled in Latin America are eligible to enter the contest. You just have to make the best game you can and submit it in latam.square-enix.com by the 31st of August of 2012.

… there are very interesting and strong countries in Latin America, who can compete in this contest and with a chance to become either suppliers/strategic partners, or be eligible to have a development studio from Square Enix.

Basically, according to Ken Luna, Square Enix’s Representantive for Mexico, the objective of the contest is to help out the videogame industry in LatAm, take the best videogames developed to the whole world and find out who’s who in each country. There is no limit on how many submissions are done either by an individual or a group/studio. It has to be a game that is not published yet; Square Enix will publish it and it will be given for free at the beginning let people choose the winner via their votes. Besides this opportunity, a possible door will be open to keep on working with the publisher; all the intellectual property of the winners will be owned by Square Enix and you will have a revenue share option that will be seen on each case. If you don’t win, you get to keep your intellectual property and you will have a finished product ready to be published and distributed. Doesn’t sound that bad uh?

Ken Luna did a bit of a road show in all the major universities of Guadalajara and Mexico City, and it has been announced via Square Enix’s partners in every country and, at least in México, in the most active game developers communities of Motor de Juegos and KaraOKulta.

A lot of buzz and questions were made about the contest. To me, it was clear that many studio owners, managers and some startups in the gaming arena got really afraid of this, since the giant could take away their talent in this nascent industry. But hey, isn’t it more an opportunity than a risk? Having big companies looking to establish in our countries is, without a doubt, a good sign of how either startups can rise because of this interest or simply a great opportunity for all those graduate students that have a curriculum related to the industry.

One thing is for sure, startups can rise from this contest and somebody is going to have the benefit of working with Square Enix. Who would have thought that Japan is thinking about this? Who of you really thinks that this is more like a golden-opportunity instead of a threat?

Please leave your comments underneath the video where we speak – in spanish– with Ken Luna. If you want to contact him, follow on twitter his personal account or the one for the Square Enix’s Contest. (Video en Español)