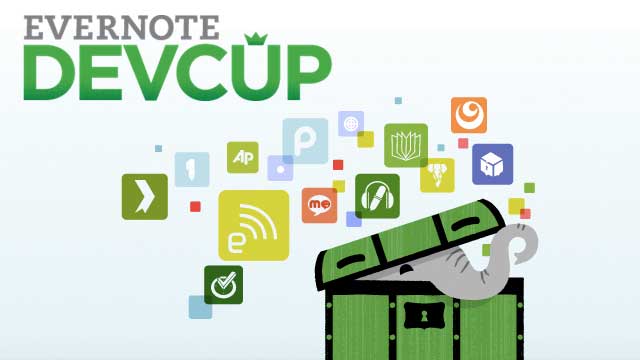 Evernote announced the Second World Developer Competition: Evernote DevCup. The contest offers a unique challenge for software developers and designers: to create innovative products that help get the most out of the tool for its 25 million users.

Last year, nearly 1,000 developers  joined  the competition. The winner was Touchanote, an Android application that allows to associate objects in real life with Evernote notes using NFC technology. The second place were for Notable Meals, the first «edition» of Evernote Food. And the third finalist, Colorstache developed a search engine filtered by colors.

Find new applications that combine functionality with intuitive designs. Evernote’s mission is to think and develop applications that are useful to users in terms of capture and remember important things in their lives.

As only one third of their users are located in the United States, and about a third are in non-Western countries, there are lots of possibilities to develop applications that meet the needs of specific groups by nationality, culture or group membership. Ideas and sources of inspiration can be found here

Any form of software that can integrate with Evernote API is eligible for DevCup. Either desktop, mobile or the web.

Prizes are over $ 100,000 and provide an opportunity for finalists to present their work to those attending the Evernote Trunk Conferencein San Francisco.

*Up to June 25 – join a team, generate an idea, create an application

*Late summer (northern hemisphere) – the finalists will present their projects in the Evernote Trunk Conference, Grand Winner and runners-up are elected

Evernote, will work to inspire contestants with meetups around the world . Meetups provide brainstorming with the staff of developer relations, connection with other participants and learn more about Evernote.

Also webinars will take place for those who can not attend. To see the list of events  and all the information you need on DevCup, login devcup.evernote.com.

Previously, Evernote  announced a new developer site divided into different sections, including Documentation (which aims to provide an overview of the Evernote service in order to start developing immediately)

Those developers find chapters on «authentication» and «building notes» among others.

In addition, there is a section of Developer Support & Showcase to review all the steps of the Evernote API (key, status, etc.) which shows great examples of integration with Evernote and approaches to building applications. Finally there is a space of News & Videos with all information related to the developer community.