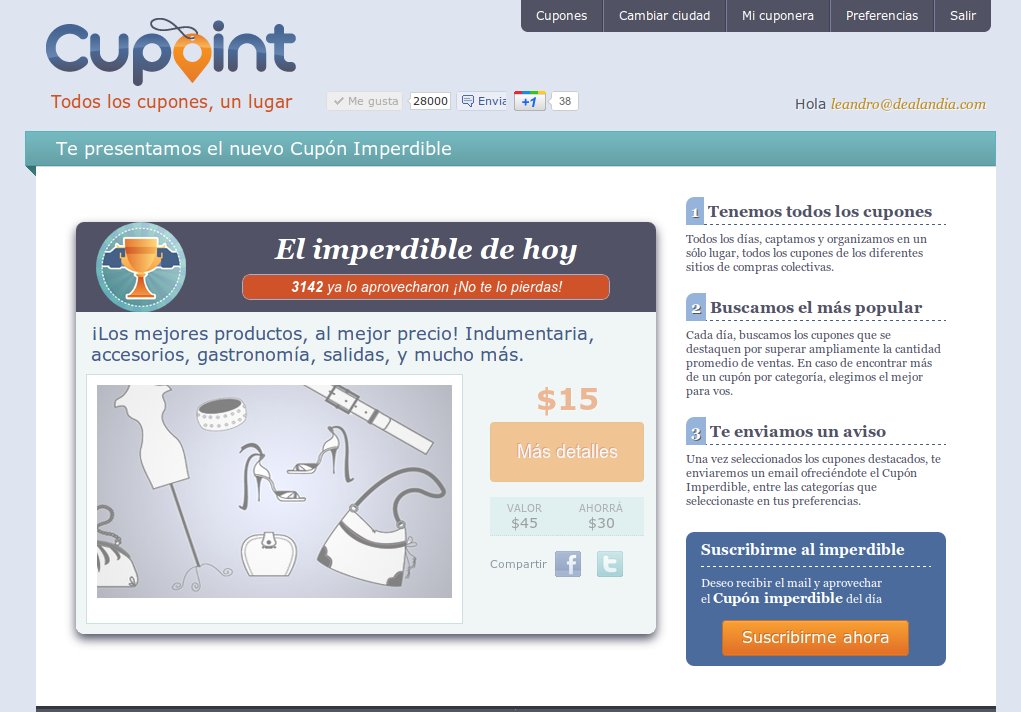 In Argentina, at least 40 companies offers collective purchases for the local market, and  the  Argentinian Chamber of Electronic Commerce, CACE , estimates the revenues of this market in 2011 estimates in USD 93 M, a figure expected to double in 2012.

Coupons sites, which appeared in 2008 reached a new target: Internet users who had never purchased online.  The coupons also motivated  to small brands  to use Internet as a new channel for sales and promotion

As a consequence of the boom ( 2009) , a new need turned up: users need to organize the offers they receive. «Currently there are over 600 coupons offered perday only in Buenos Aires. Users feel confused and don’t know how to take advantages of the offers and  to not miss the most important» says Diego Sternberg, founder and CEO of Cupoint.

In 2009, Sternberg founded the country’s first coupon site for premium brands called FullExit. In the same year Groupon came to Argentina, among other big coupon sites: «I thought I should build an even better coupon experience. In February 2010 I founded the first  aggregator in Argentina: Cupoint. FullExit was sold to what is now PezUrbano, and I focused my whole resources on this new challenge» says.

In June 2011, Cupoint was chosen among 20 finalists by La Red Innova Open Talent 2011. Later, in October, they received USD 700K of Ax Ventures – Pymar Fund and Angel investors- for a minority share in the company. With this investment, Cupoint extended its operations to Spain, Brazil, Mexico, Chile, Peru and Colombia. It currently has 12 employees and continues  hiring new ones. In 2011 reached a total billon of USD 250K.

How does it works?

Cupoint «learns» from the likes of users and recommends only those coupons related to their interests. «On the one hand Cupoint groups all daily deals of all coupon sites (Groupon, PezUrbano, LetsBonus, Agrupate, etc.) and on the other hand, recommends the users the best coupons offers according to what they would be interested in «says Sternberg.

The user receives a single daily email with the recommendations, without wasting time looking and filtering. Customers can choose different proposals with different filter parameters such as income,  offer popularity,  geographic location, etc. «It means substantial savings of time, and  also of space in your mailbox,» concludes the entrepreneur.