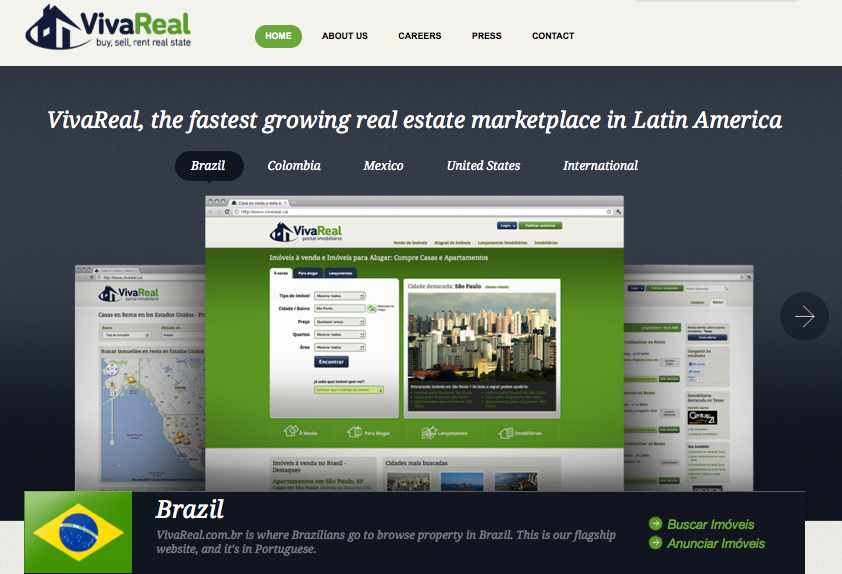 I first wrote about VivaReal two years ago in an article that was published in VentureBeat and the digital edition of the New York Times.  Back then, I wanted to inform the world about a startup that I felt was on to a big opportunity: the Latin American real estate advertising market.  How things have changed.  On the heals of a funding round that I wrote about last November, the company is today announcing that they’ve closed a new round of funding with A list investors with a sales focus on Brazil, but a technology development centered in Colombia, South America.

As I mentioned in my previous article, last year’s investment included investors such as Greg Waldorf, Trulia investor and board member, as well as Simon Baker who helped Australia’s REA Group into a billion dollar real estate portal.  Other investors included Wences Casares and Micky Malka of Lemon.com and Dave McClure of 500 Startups, among others.

The current round of funding includes Kaszek Ventures and Monashees Capital. Eric Acher and MercadoLibre co-founder and former CFO, Nicolas Szekasy will be joining VivaReal’s board.   As I wrote previously in PulsoSocial, the company is focusing on the Brazilian market opportunity and has been quickly making headway with local competitors there.

What hasn’t been written about as much is the fact that the company has a growing development center in Bogota, Colombia.  Company CTO, Thomas Floracks, a German national, has been building an enviable team of designers, developers and infrastructure experts many with experience working on projects around the world (including the states).

A little known fact is that, while Argentina and other countries have well-publicized outsourcing success stories such as VC-backed Globant, Colombia has made headway in this market in recent years.  For instance, Zemoga, a digital agency with development center in Colombia, boasts customers such as Sears and other well-known brands.  Also, Studiocom has for years executed work for companies such as Coca-Cola with talent from this same country.

The company’s new war chest will be used in part to fund their aggressive sales strategy, but also to continue to build out their technology team. This new funding not only brings new funds to continue along that path, but also experienced advisors and board members that, combined with a focus on a strong customer experience should make the company a force to be reckoned within the Latin American real estate advertising market.