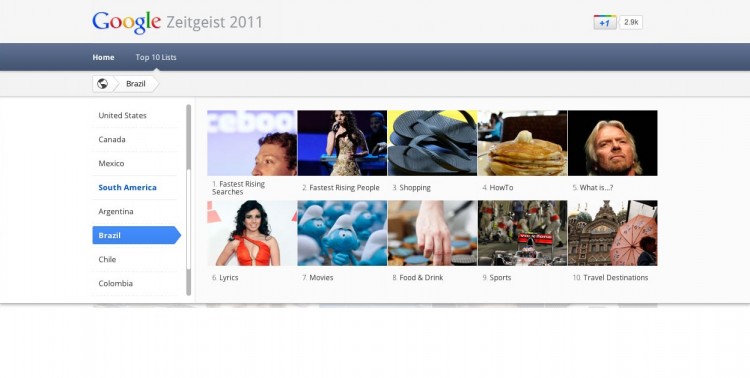 With the end of 2011 approaching, take a look on what happened in the last 12 months can be entertaining and a very good strategy to review your plans for the next year. The recently published Google Zeitgeist 2011 is definitely an interesting source to realize what really happened among the online audience, based on their actual searches. Digging the published data for Latin America (Argentina, Brazil, Chile, Colombia and Peru) you can find way more interesting trends than the top ranked “rising star” Rebeca Black.

Statements that the Latin culture is social and that this market is especially huge in Brazil is everything but new and the search numbers just prove the point: among the fastest rising searches, “Facebook” is top ranked in Brazil, Argentina, Peru and the runner up in Colombia. Tumblr and Twitter are also in the rankings.

This is even more symptomatic in the Brazilian market, the only country in the world where Orkut established the leadership in the last years. Therefore, as the searches show, it is probably something about to change. In September 2011, Ibope Nielsen Online has published that Facebook would have overtaken Orkut’s leadership. It is hard to be sure, as comScore affirms that the first place is already with Orkut despite the high growth of Facebook’s market share and Hitwise numbers shows a technical tie. According to the numbers and trends, if the change in the first place hasn’t happened in 2011, it is about to happen early 2012.

If you look at the “How to” ranking in Brazil, the items about create and delete a Facebook profile are on top. How to recover an Orkut profile and how to exclude a Twitter account are also in the Brazilian ranking. A similar behavior can be found in the same ranking for Colombia.

Several startups are emerging in the region focusing in social solutions and they definitely have a huge and high growth market to conquer.

While in US the new gadgets such as tablets, e-book readers and smartphones are leading the rankings, digital cameras are still in the spotlights in Latin America: first place in the Shopping ranking in Brazil (followed by digital photo frames), second in Argentina and under a specific brand in the 6th position in the Colombian ranking. In Colombia (first place) and Argentina (fourth place) TVs have also showed up.

While smartphones are taking the place of several other devices such as the digital cameras, the high price of those devices is probably a reasonable explanation for this trend, especially in Brazil, where is cheaper travel to US and spend a couple of days in NYC or Miami to buy the new IPhone 4S than buy it locally at an insanely high price. We already posted about the Brazilian mobile market a couple weeks ago.

With the rising middle class in Brazil and the weak US dollar, the number of travels abroad has been increasing dramatically in the last years (a reason for so many digital cameras?). Orlando and Las Vegas are the top destinations of the Brazilian tourists in US, who are becoming one of the most profitable tourists for the local commerce.

Cancun is another destination that stood out in the Google’s numbers: it is the first destination for Chilean tourists and the second for Brazilians and Peruvians. In the Chile’s and Peru’s ranking, Orlando is also there, but in the 10th position.

Curiously, pancakes and cupcakes are apparently delighting those travellers back home: recipes and how to make those treats are all over the rankings of all countries analyzed. It is probably Google showing the culture exchange in the modern world.

In Brazil, passport issuing and other typical traveller’s goods have a considerable presence in the Fastest Rising Searches and Shopping rankings.

What is … maybe some hope in Brazil?

A kind of ranking that wasn’t published for other Latin America countries, except by Brazil, was about the “What is …” searches.

After a year full of corruption problems that brought down several ministers and mayors across the country and a massive effort to boost entrepreneurship in Brazil, here is the top ranked searches in this category: Ethics, Sustainability and Citizenship. Biodiversity and Entrepreneurship are the 5th and 6th and Social Responsibility on the 10th.  Maybe a hint for some changes or in the Holidays spirit: a little bit of hope for the next year!

The following video shows the 2011 in review according to the global Google searches. Enjoy it and Merry Christmas!