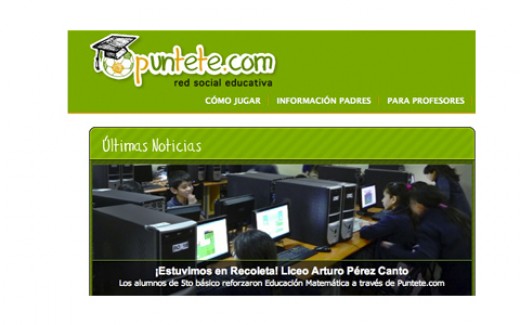 Digital tools are transforming industry after industry.  Yet, some verticals such as education still function relatively the same as it has for more than the last hundred years.  Now, Puntete, a Chilean startup founded in 2010, is out to apply social media, gaming and analytics to the education experience of 7-13 year olds in Latin America.

Puntete in the chilean own words means  kickoff, and is a good name for a educational tool that offers a combination between learning, knowlegde and games.

CEO Raul Reeves, says he’s leveraging “Social Edutainment” to increase student engagement while providing the opportunity to monitor student progress more precisely and at less cost.  As Sugata Mitra has poignantly described in his TED talks, digital tools allow primary education to take place not only between the teacher and the student but also between the student and the computer and between the students themselves.

For about US $150 per month, the company is offering schools an educational platform and a growing base of content.  Students can not only collaborate with teachers, but also can answer questions and accumulate points in an interactive game that they play against their classmates.  In turn, teachers and parents can obtain detailed progress reports and better understand areas for improvement.

Reeves sees much value in building out the educational content on the site as well as the platform tools such as those for generating a repository of commonly asked questions and answers.  Also, tablet versions of the product are on the roadmap for development.  In early tests, more than 10k students have registered and used the platform.

According to Reeves, Chile has about 9,000 schools and 1,500,000 students that could benefit from the Puntete platform.  The company is beginning to beta test the platform with Chilean schools before expanding to other Latin American countries.  Puntete has a long road ahead, but is well on its way to helping make the primary education experience in Latin America a bit more fun.