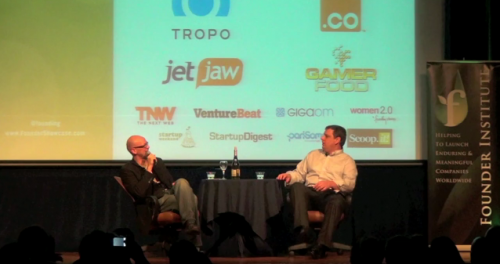 It’s now been almost a year since I launched the first Latin American chapter of the Founder Institute in Colombia. Adeo Ressi, the founder of this international accelerator, kicked off the semester with two trips to the country. There’s a saying in Colombia that the real risk of this country is wanting to stay and, from a “digital” perspective, this happened to the Founder Institute when it recently decided to adopt the Colombian Top-Level Domain (TLD) and convert it’s URL to FI.co.

Adeo made the announcement last week during the 8th Founder Showcase event in San Francisco (minute 3:30 of the below video).  .CO Internet is a Colombian start-up that, in a year and a half, has managed to register more than 1 million domain names world-wide (from a negligible base).  Under the leadership of Juan Diego Calle, a serial entrepreneur who sold his previous start-up to Yahoo, .CO Internet managed to convince organizations such as 500 Startups (500.co) and AngleList (Angel.co) to adopt the .CO extension.

I met Juan last year at South by Southwest (SXSW) and upon hearing about the imminent launch of the Founder Institute in his country of origin (he now lives in the states), he immediately agreed to become a Platinum sponsor. I must say that, unfortunately, these types of rapid-fire decisions are not typical of the culture in Colombia, but, hopefully, this will begin to change, in part, through the influence of the Founder Institute grads in the coming years.

During one of the his trips to Colombia, Adeo was able to meet Eduardo Santoyo, Corporate VP, and Santiago Rodriguez, Colombia Marketing, of CO Internet.  During that meeting we were able to review the impact that the Founder Institute is having throughout the world.  Finally, the topic of a possible domain name change (to FI.co) came up and the rest is history.

Because of the disruptive changes happening around us, activating dormant entrepreneurial talent in countries such as Colombia is probably a good thing. The aforementioned people have been ardent supporters of the Founder Institute in Colombia and they are certainly hopeful that, in addition to its new .CO extension, the Institute will have more reasons to talk about the country in the future.

Content.ly: Empowering and connecting
Guide to accelerators in Brazil