A strategy I mentioned during Piola last week, “coordinate the uncoordinated” is used by independent film makers in Latin America to obtain funding and generate interest in their films.  “Pelotero” from the Dominican Republic, “Changes Lives” from Mexico, and “Digital Aymara” from Bolivia are films using the independent film website, IndieGoGo, to attract investors and fans from the US while the films are in production.

“Pelotero” is a documentary about Dominican teenagers preparing to try out for major league baseball teams when they turn 16.  The documentary explores the dark side of the system, exposing corruption, steroid use, and age falsification.  IndieGoGo allows the film’s makers to generate interest among independent film fans during production with social networking tools.  They can create a widget to place on blogs, websites, or e-mail signature that enables fans to donate to the film.

They can create a Facebook page for the film and add updates via Facebook connect in their news feed.  Fans of the film can click on buttons on the film’s profile page to share with friends on Facebook and MySpace, send to contacts in Gmail, Hotmail, or Yahoo, and Digg it, or send a Tweet (“Help make indie film happen for Pelotero on #indiegogo http://www.indiegogo.com/Pelotero?account_id=7871&iggref=twtr”).  All of these tools enable the film makers to tap into the collective power of coordinating their fans. 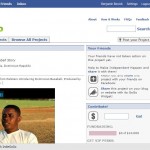 While most of the users of IndieGoGo are in the U.S., including award winning film makers Tiffany Shlain, Arin Crumley, and Lance Weiler, many of the 2,000 films on the site come from around the world.  This base of US users gives film makers in Latin America a direct path to the US market.  “Changes Lives” from Mexico is a documentary about a school that teaches children from different backgrounds to live together.  The purpose of the film is to raise money for the school.  “Changes Lives” hasn’t raised any money yet, it started on the site July 17, but “Pelotero” raised $2,000 earlier this year.

In Bolivia, the Aymara people have migrated from rural areas of the country to the cities due to problems in the mining and farming sectors of the economy.  Since moving to the outskirts of La Paz, the Aymara have not been able to join mainstream society and feel ignored by the city’s powers leading to a sense of invisibility. “Digital Aymara” is a documentary about Aymara children who are learning to produce a series of telenovelas on Youtube to communicate what life is like on the margin of La Paz society.  By taping into the social network IndieGoGo, the film’s producer, Kurt Shaw, is looking for more than simply donations, “my original hope had been to find some donors, though that was never the main priority, and other people doing similar work, so we could exchange ideas, techniques of participatory filmmaking, distribution channels.”  Gaining a distribution channel outside Latin America would certainly help create awareness of the plight of the Aymara people.   Coordinating fans on IndieGoGo to help market the film is one of IngieGoGo’s key strategies.  They suggest fans invite their friends using their email invite tool, place the GoGoWidget tool on sites around the web, introduce friends to the film’s Facebook fan page, post to Facebook, Myspace, Twitter, Digg, and Yahoo Buzz!, and contact bloggers, the web’s influencers, about the film.  In addition to producing “Digital Aymara” Kurt runs the Shine a Light organization that obtained its major source of funding from an earlier music project, City of Rhyme, a CD by rappers in Recife, Brazil.  He attributes funding to “attention in the blogosphere.”   Shine a Light’s films have received almost 100,000 hits on YouTube.

IndieGoGo gives independent film makers social networking tools like Facebook, MySpace, Twitter, and Digg and digital tools like widgets.   These tools can be used by the film makers to coordinate their fans to help raise funds during production and market the film both during and after production.  And the connection to the fans is not limited to Latin America, but is global.  What other web sites connect Latin American businesses to global markets?  What other websites coordinate the uncoordinated?  Please comment below.

When thinking about a new strategy of coordinating the uncoordinated, ask yourself these questions*: